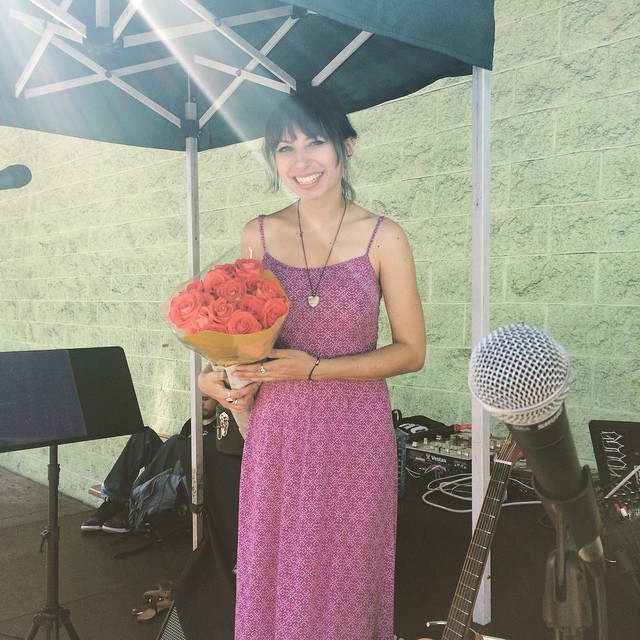 At 8:30 my cellphone buzzed and I hit snooze. I don't want to get up. I'm tried. I had a long day yesterday. Got up at 6am, went to work and subbed for a spanish class, got home and the hit the shower, got ready for the Monrovia farmers market , drove for an hour, played for 3 hours and then went straight to the studio to record a new track with Patrick. This month is an exciting time for me. I'm finally recording my song called "Jackets". I've had this song for a while in my back pocket and now it's finally coming alive!
Last night I came home at 1am and went to sleep. Today is a new day. I opened my eyes again at 9am. I heard my flatmate shuffling around, jingling her keys as she shut the front door. Time to get up. I drank a cup of coffee and then curled my hair and put on a sundress, then grabbed my gear and loaded it onto he car.

I decided to go to target to buy a new tip jar. My last one ruptured and I hadn't gotten a chance to buy a new one. I wandered around the store looking for a plastic container, something that wouldn't break. The night before I grabbed a vase that someone gave to me last year but as I was loading it in my car I accidentally smashed it. I decided that a glass vessel was too delicate to use, and I didn't want to have to deal with cleaning up shards of glass every time I got ready for a gig. So I went into the stationary section and found a basket and some thank you cards. I thought "ok this would look cute. All I have to do is attach one of these cards to the side of the basket and now I have a "thank you basket"for tips! Classy. Nice work Katie." I thought to myself.
So then I headed to the cash register and stood in line for a good 15 min. Finally when it was my turn, I reached inside my purse to grab my wallet but it wasn't there! I looked everywhere, I removed my makeup and keys cellphone and change purse. " 75 cents?! Why didn't I bring my wallet!?" I said. I asked the woman at the register to save my basket. I would be back in 10min.

Then my cellphone started to buzz again. It was a text from a guy I met at a party last week. For the sake of this story I'm going to call him Mr. G. "What you up today? Wanna go for a ride on my bike?". I thought to myself, " man that sounds amazing. Sounds like an adventure. I gotta text him back."

Mr. G rides a motorbike, and when I met him I started picturing him in a leather jacket, the wind gently grazing his long hair. At the time I thought, " He's hot. I gotta get his number. "

I texted him back. "I'm playing at a flower market today!" Then he told me he wanted to come by to see me play so I texted him the address and went hurried towards my car. I had half an hour to get to the market. I couldn't afford to be late. 11:00 on a weekend is the best time to go busking. People come out to spend time with their families, I was sure there would be a crowd by the time I got there. So I drove home as quickly as I could, dashed through the front door and scooped up my wallet, which was hiding in my desk drawer. I don't know why I put it in there. I usually keep every nestled safely in my purse. So I drove back to target, stood in line and found the woman holding the basket and thank you cards. It was 10:45. "I'm gonna be late"I thought. I hurried to my car again and thew the basket on my front seat, typed in the directions in Google Maps, turned on my car jams on pandora and was off. I took the 2 freeway into downtown. "Traffic ugh, and it's hot." I said to myself. Google says its 85 degrees outside.

Being in a traffic jam in downtown was actually quite nice. I began looking at all the old buildings, they looked like they were from the 1920s. Then I started imagining people men in suspenders and bow ties and women in flapper dresses walking down the street. This place used to be the highlight of Los Angeles back in the day. As I was driving, I passed crowds of people with shopping carts, and trash bags. There were men on street corners selling chicerones and snow cones to passerbys. The buildings provided a brief amount of shade on a hot day like this.

It was 11:05 now. I'm almost at the market.. It's somewhere on 7th and Maple street. I found a blocked off street and a woman in black waving hands at me. It was Susan the woman who runs the market. She gestured to me a place to park on a blocked off street corner and I parked the car. We introduced ourself and she started helping me unload the car. "So do you play music full time?" she said. I paused for a minute. "Yea I do." I thought to myself, "yes actually I do play music full time. If I added up the number of gigs I did in a month I pretty much have a full time job... on top of my other full time job being a substitute teacher. Ha. Being a musician is my alter ego.

I followed Susan into the market, pushing my cart in front of me. "You can set up right here on the music feeds stage" she said. There was a DJ playing there next to the Viva Los Cupcakes booth. He said his name was AC. "Do you play any instruments?" I asked him. He pointed to his beat machine. "That's my instrument" he said. Then he showed me his display table with the 6 CDs he had made. It was a pretty elaborate display. He made some space for my basket and CDs as well.

I decided to plug into the DJ's PA for this gig instead of using my amp. The speakers were set up in a way that would create the best listening experience. The only problem was that I had no clue how to work those things. I've had his experience before. I show up to a gig and don't know anything about sound. It's always a learning experience. So I took out my cables and started plugging things in... "I need effects" these vocals are too dry" I thought. Then I started pushing buttons... "There must be some kind of effects send button" I thought. Sure enough there was one.. AC put it up all the way and I started playing a cover of "Crazy" by Gnarles Barkley. It sounded like I was inside a cave. You could hear my voice echoing throughout the streets.

I finished the song and then fiddled with the knob again. "Ok that's just about right. Not too much reverb. Don't go crazy Katie. You are at a farmer's market. This isn't the Hollywood Bowl" I said to myself. It started to sound a bit better now.

I started playing my set. I didn't know how people would react. This was a new market. There weren't many people out. I guess because it was so hot everyone was hanging out in the shade. Sure enough though I watched a teenage girl put a dollar in my basket. She stayed for a few minutes to listen, the smiled and walked away. Then I decided to play "kiss me" by sixpence none the richer. A couple stopped to listen. The man was holding a bouquet of flowers and grabbed the girl and kissed her." Then he put some bills in my basket.

A few songs later during my set a little girl and her father came to listen. The girl started wiggling around and dancing. She started shaking her butt like Rhiana in her music videos. It was so cute. Then she started dancing with her dad.

So I thought to myself. "Music is so powerful. I feel like I can do anything when I'm singing. I just like observing what happens to people in the streets. Everyone is so happy!"

Then I started playing some of my own songs. I played "Cure for Pain" which is a song I wrote recently about how to deal with depression. I played it at a bar and got a weird reaction from the audience. I thought it wasn't a good song so I stopped playing it live. Better stick to covers. I thought. People like that. You know what? People actually applauded when I finished the song.

Being an artist is difficult. I feel like when I play, I want to please people, at the same time, playing a song I wrote is so personal. I can't help but want validation from the audience. How do i know if it's a good song if i don't get feedback? Every audience is different though. Playing a song about depression to a room full of drunk people is different than singing to a crowd of children and families. Of course people are going to take it differently.

So then I continued the set with more of my own songs. My feet were starting to sweat and my arms were burning. It was still hot even though I was playing under the gazebo on the stage. As I was singing a man wearing a motorcycle helmet walked up to the stage and quickly placed bouquet of flowers at my feet. He hurried off and I heard an engine off in the distance. " Why didn't he stay and listen?" I thought. I finished the song and Susan came up to me. She said what the motorcycle man did was very thought out, very planned. It was nice thinking. I quickly grabbed my phone off my music stand.

I texted Mr. G. "Was that you?! Are you at the market? Were you the one who got me flowers?!" No reply. The flowers had to be from Mr. G. Who else could they be from? I didn't know anyone else who rode a motorcycle.

A few minutes later I got a reply. "No. I decided to sleep in. The market was too far. Come to the beach. Let's hang out."

"Typical" I thought. The fantasy of Mr. G now began to vanish from my head.

If Mr. G didn't give me flowers, who was this mystery man? I wanted to see the face behind the helmet.